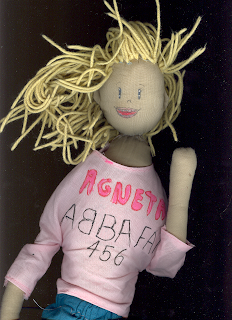 Hi fans!  Agnetha Dollskog is back and I am about to tell you how much fun I had today!  Today, ABBAFan456 was taking a trip out and brought me along!  We stopped by some old cars and they were really old!  I didn't even want to touch them - even though I am cloth.

Then we went to a store.  ABBAFan456 brought me in and we looked around at a few things.  There was even a camera which showed what you looked like on a screen - I think that's what it is. You know, I'm only seven years old - or at least that's what ABBAFan456 says.  Anyway, it made me look funny because it showed what I looked like reversed.

After that we went to another store and bought some wood.  ABBAFan456 put me in the middle seat and buckled it.  The only problem was that I'm so small, I kept on slipping out of the seat.

Finally we got home and now I'm sitting at the computer, typing away.  The other ABBA dolls keep on telling me that I have gone out too many times and that ABBAFan456 should take one of them instead.  Well, ABBAFan456 did take Bjorn out on a boating trip a few weeks ago...  And Frida did go somewhere with ABBAFan456 a while ago.  I don't really know what Benny's been doing, though.

Anyway, I don't want to get caught, so I'll stop the writing and let the other ABBA dolls use the computer.  Bjorn and Benny have been waiting for me to get off so they can go play some computer games and chat with their friends...  Frida doesn't really care because she spends most of her time playing with her little felt dolls.