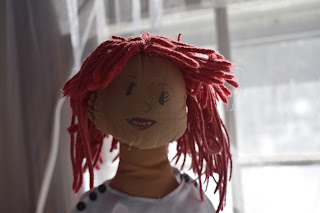 The past 9 years have been amazing, here's to many more.  :D
Posted by ABBAFan456 No comments: Links to this post

As I mentioned in my last post, I decided to make my Agnetha doll a beanie of her own after making her beanie multiple times in human size for myself. :)  Using embroidery floss and the tiniest crochet hook ever that I happened to find in my closet, I took upon myself the challenge of making all the tiny stitches and making it as identical to the ABBA the Museum beanie as possible in miniature.  I was able to follow the instructions exactly (besides the 14 cm part, Agnetha doll's beanie is much smaller than that!) and I'm pretty pleased with the way it came out! 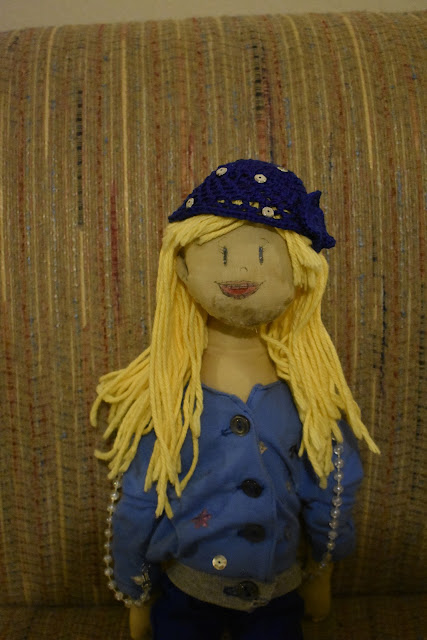 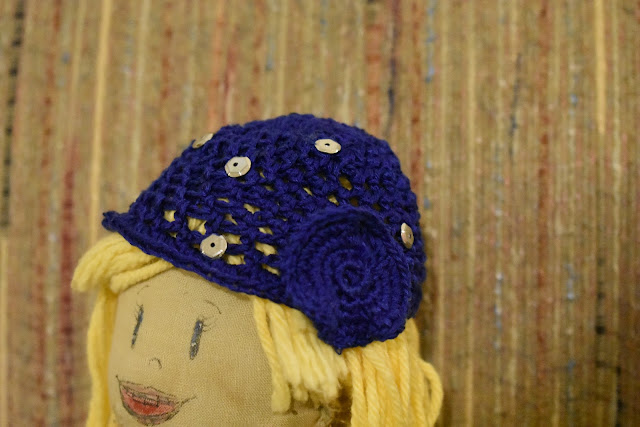 For a slightly more detailed post, you can check out my Sewing blog. :)
Posted by ABBAFan456 No comments: Links to this post

So I taught myself to crochet... 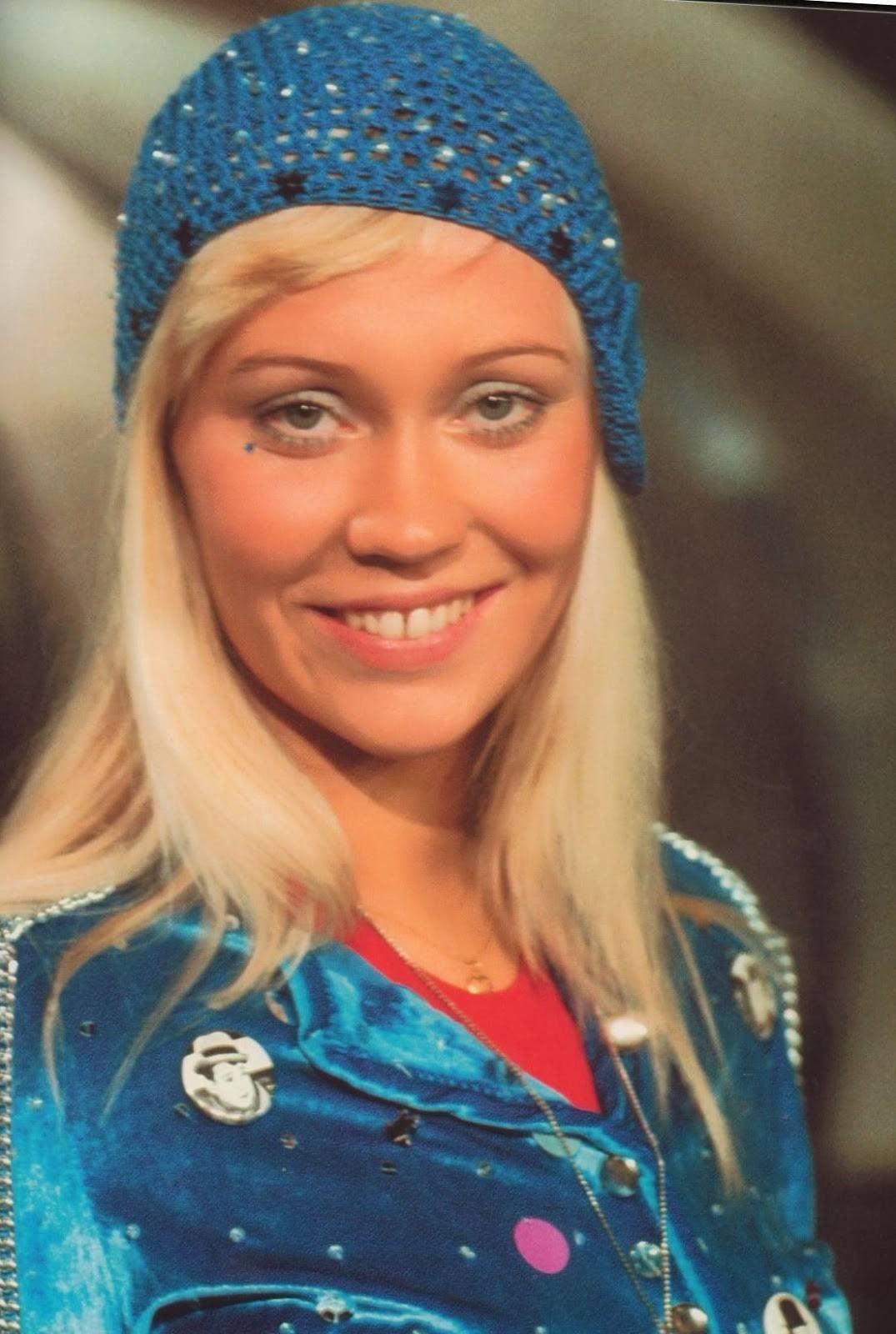 In 2017, I purchased my first ever order at ABBA the Museum's web shop.  Shipping from Sweden all the way to the US can be quite expensive, so that order was only made possible because of a special Free Shipping promotion they were having.  There were so many things I had wanted to buy, but because I didn't want to spend too much, I only bought 3 low priced items.  Among the items I wanted to get, I really wanted to get the Agnetha Beanie Crochet Kit.  Mind you, I didn't know how to crochet, but I had just taught myself to knit and thought I could learn to crochet as well if I got the beanie kit.  Unfortunately, I didn't get the beanie kit because if I did, my order would have went up quite a bit and I don''t really have the money to spend on that...

So I decided that if ABBA the Museum would have another free shipping sale, I'd splurge and get myself the beanie kit.  I spent the next few years waiting for ABBA the Museum to have another sale, but all the sales they did have were for 5% or 25% off your total purchase, and it did not cover the shipping cost.

Recently, on ABBA's official website, they've been having a monthly quiz thingy where every month or so, they have a quiz with about 15-17 questions.  When they first introduced the monthly quizzes, they said that there would be rewards.  (I still would have played even if there weren't any rewards, lol.)  So I've been playing these monthly quizzes, and not to brag, I pretty much got 100% on all of them, except for the quizzes where they break and decide to not load the questions and then sometimes it won't even let me answer, lol.  Anyways, after several months of playing these quizzes, ABBAsite gave me a 15% off coupon for ABBA the Museum's webshop.

Seeing as the shipping is so darn expensive, I wasn't super enthusiastic about the coupon, but I also had earned a little money that month and thought, maybe 50 something dollars for a $15 item isn't so bad???  So I was going to splurge on it, but then my dad had a better idea for me.  With my dad's help, we made contact with someone in Sweden, asking if we could ship the beanie kit to them, and the person was really nice and said yes.  So I paid ~$24 for the beanie to be shipped to Sweden.

Now, the main thing that I really wanted from the beanie kit was the instructions.  The reason why is because I can pretty much get the materials I need for the beanie at my local Walmart.  All I'd need is a ball of blue yarn, a crochet hook of the right size, and sequins.  The person from Sweden sent us an image of the instructions, and I was all set.  I got the materials from Walmart, which were really cheap ($2 for the yarn, maybe $5 for a 4.25 mm crochet hook.  The actual crochet hook for ABBA the Museum's kit is 4 mm, but they didn't sell that at Walmart, so the 4.25 had to do.)

The next step was to actually learn to crochet.  I thought it would be easy since I had an easy time learning to knit.  Because I know how to crochet now, it's pretty easy, but me a few months ago found it to be pretty tricky.  It also doesn't help that the Agnetha beanie kit probably isn't for beginners, but I was determined. 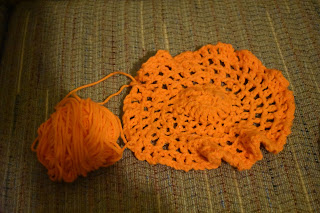 My first attempt at the beanie was with an orange yarn I had lying around so that I wouldn't waste my blue yarn.  Now I was able to learn the different stitches by watching a ton of YouTube tutorials, but what I did not know was how to Double Crochet in a ring or what a Chain Space was.  I also couldn't figure out whether for Row 5 and onward I was supposed to continue crocheting in a spiral or if I was supposed to start a new row and join it with a slip stitch before starting another row.  This was my first attempt.  As you can see, I didn't get very far.

After consulting with a family friend who is incredible in everything, including crocheting, and watching a few more YouTube tutorials, I finally learned what a chain space was and that yes, you are supposed to continue in a spiral from row 5 and onward until you get to 14 cm long.

So I tried again, this time with my blue yarn from Walmart.  Compared to the monstrosity that was my first attempt, this one was pretty good.  It actually had a beanie shape instead of the weird pancake-y shape of the first one.  My only concern was that it was way too big.

My first thought was that I just have a tiny head, which I do, just I didn't think it would be so tiny that the beanie would just slide off my head.  Obviously I did something wrong, and I couldn't really figure out what that was. 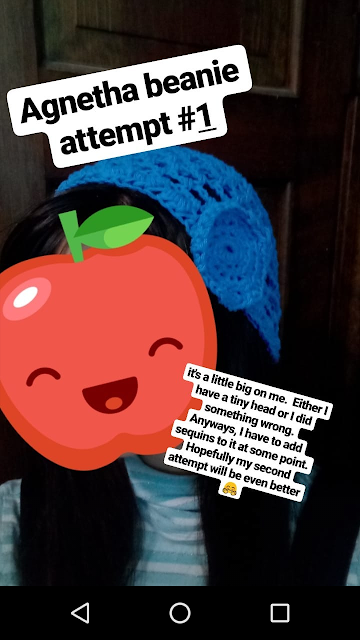 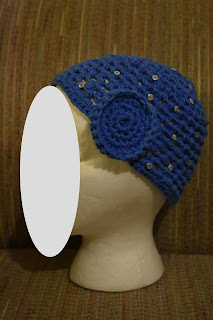 I bought another thing of blue yarn and tried again.  My next attempt was a lot better.  Turns out I wasn't doing a good job at keeping the tension right?? or something along those lines.  (I don't actually know crochet terms - I'm still a beginner!)  I was really happy with the way it turned out since it actually stayed on my head properly.

My only concern with it was the fact that I was using a beginner method by only going through the top loops of each stitch, and it left a weird seam almost on each row that I did not like.  It's not all that noticeable which is why I was satisfied enough to add the sequins with fabric glue, but I was dissatisfied enough to feel the urge to make yet another beanie. 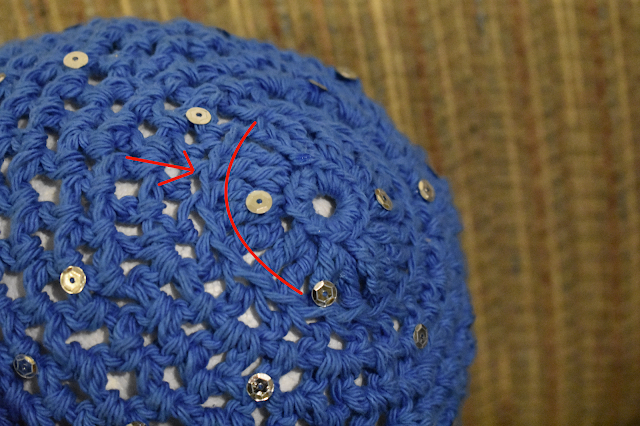 I got yet another blue yarn from Walmart, and made myself a beanie using the not-beginner method of going through both loops in each stitch, and I ended up with a much better result. 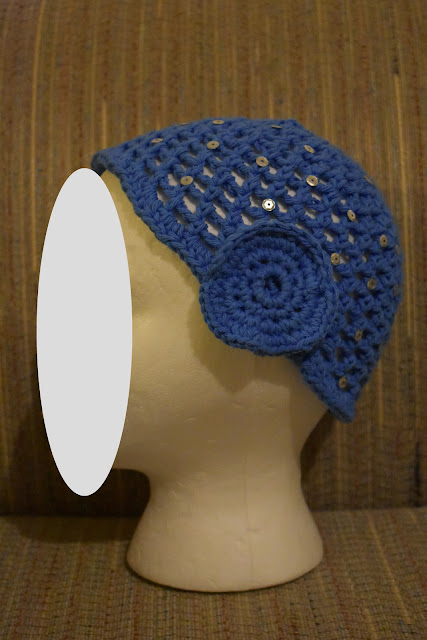 Now, the person who I had the beanie kit shipping to in Sweden decided to ship the package to me.  They really didn't need to do that and I have no idea how much they paid to ship it to me, but I am really thankful and this person is one of the kindest and sweetest people in the entire world. <3 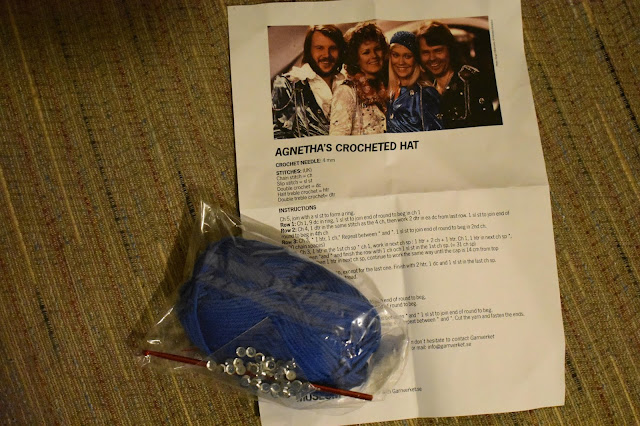 So, using ABBA the Museum's official yarn, crochet hook, and sequins, I was able to make myself yet another authentic-enough Agnetha beanie. :)

One thing I noticed is that ABBA the Museum's yarn is definitely of higher quality, and it doesn't split apart as much as my Walmart yarn does.  Definitely worth the $24 I paid for it. :') 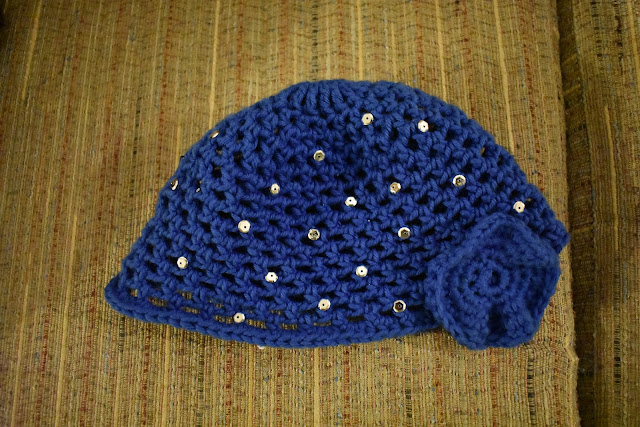 Overall, even though the ABBA the Museum yarn is higher quality, really you can make yourself an Agnetha beanie really easily and a lot cheaper with just supplies from your local craft store.  All you really need is the instructions and you're all set. :3

I hope you enjoyed this extremely long post documenting my crochet journey, and yes, I did make a new beanie for my Agnetha doll.  Be on the lookout for a future post on that, lol.
Posted by ABBAFan456 No comments: Links to this post 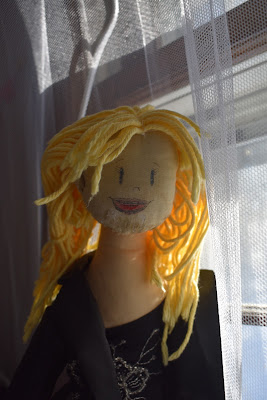 Another year has gone by, which means it's time for another one of my doll's birthday posts. :3

Today is my homemade Agnetha doll's 9th birthday.  Next year it'll be 10 years... :O  I know it's weird to be celebrating my doll's birthdays every year, but I'm just glad I've been able to have my four, raggedy ABBA dolls with me for the past 9 years.  :)
Posted by ABBAFan456 No comments: Links to this post 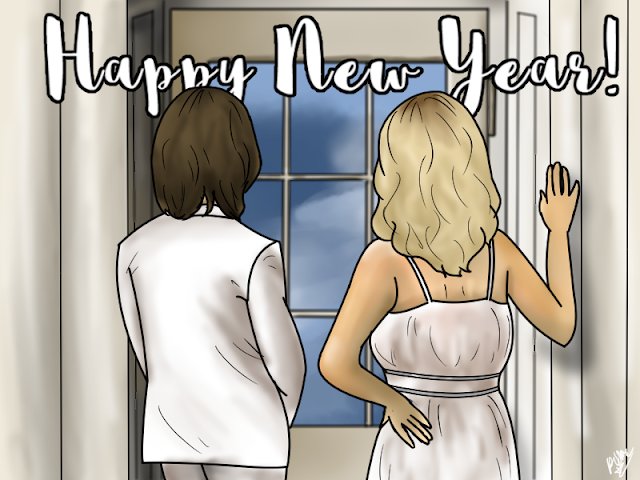 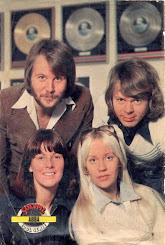