Recently, Bjorn gave a speech where he announced some exciting updates on the Virtual ABBA Tour that is happening in 2019! :D  I still have lots of questions about holographic ABBA, I'm sure a lot of us do, but I'm ridiculously excited for what's to come! 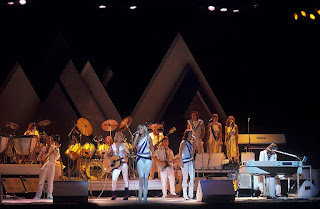 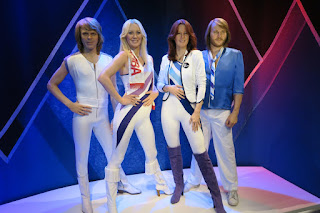 Firstly, the "ABBAtars" as Bjorn calls them, will be in the style of ABBA's 1979 tour look.  He says that they all liked the way they looked then.  I know a lot of people prefer the 1977 tour look over the 1979 tour appearance (I might be among those people, haha), but I can see how the 1979 tour look is a pretty iconic one.  And if ABBA themselves prefer the way they looked in 1979, then that's perfectly alright.  I'm thinking that maybe they could do something like they have with the wax figures at the museum, where they're wearing their 1979 outfits but look like they did in 1977 (Agnetha has long hair instead of short hair, Frida's hair is long and red, etc.)  As someone who's crazy about getting everything perfect and accurate (you all know how I am with tribute bands), I wouldn't be too happy with that, but it's a compromise. Still, I'm quite excited for this.  If they're going for the 1979 look, I wonder if this will be a recreation of the 1979 tour as well.  (But then no one would need my recreation videos anymore.. *cries*  just kidding of course. :) )   Random thought here, but what if I helped inspire them to make this with my videos...? 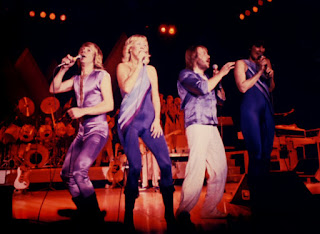 Seeing as Benny said that they'd use studio vocals as well, I'm assuming for songs that ABBA had never performed live before, I'm thinking that they're just using the 1979 appearance and then a whole new set list.  It'll be cool either way.  I'm curious as to whether they'll switch costumes from white to blue like they did in 1979, or will just be wearing one of the costumes. If the latter is the case, I wonder which costumes they'll choose, white or blue...  Or maybe they could make a whole new outfit design that Owe Sandstrom could come up with to make the tour even more unique!


Bjorn also mentioned that in the fall of 2018, there will be a broadcasted ABBA tribute show on TV where lots of guest artists will be performing, and best of all, Vitrual ABBA will be making their debut where they will be preforming one song!  In Bjorn's speech, he said that the song could have been the title of his speech and that if you know, you know which song it is, but I honestly don't really have the patience to watch his entire speech to try and figure out which song it is, so I'll have to wait until this fall to find out.  (I just hope they won't be singing Dancing Queen since that'll be a bit of a let down to me... sorry.)  And then in 2019, Virtual ABBA goes on tour.  I'm so happy to hear that we don't have to wait until next year to see how Virtual ABBA works and what it'll be like.

I still can't believe that this is happening and that everyone will get to see ABBA performing again on stage as holograms - this is not a reunion.  I really hope that when the tour begins, that they'll come somewhere near me so that I'll be able to share this experience.  I don't want to miss out on this incredible thing!