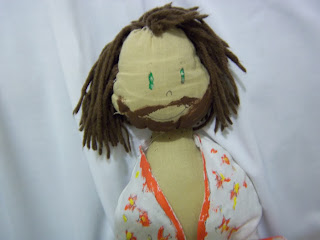 Hello there, ABBAFan456's Blog viewers!  This is my first post here...  The other dolls are always on the computer, playing with those virtual paper dolls - well, Agnetha and Frida play with them, not Bjorn.  Bjorn's usually in his room, trying to write new lyrics for random tunes in his head.  He hasn't come up with anything new, though, so no new albums yet.

Anyway, ABBAFan456 was supposed to make us our golden movie outfits, but got lazy and didn't make them.  Then, we got the ABBAFan456 shirts.  We got a few more boring outfits, and then we got our "Aliens from Outspace" costumes - well, that's what ABBAFan456 calls them.  They're the outfits we wore on the Tommy Cooper Show in 1974.

The first outfit to be made was Bjorn's outfit which has a cape built in.  (He's the one I'm calling Captain America.)  I have to say, he looks very patriotic.  His cape is red and white, and his pants are blue.  I'll post pictures of the new outfits on July 4th because of the colors.

My outfit has an actual bird feather on it.  It's from ABBAFan456's father's bird.  Even though it's very small, I really like it.  I sort of feel that my outfit is better than Frida, Agnetha, and Bjorn's outfits.

Here is a picture of what the real outfits (the ones that the big ABBA members wore). 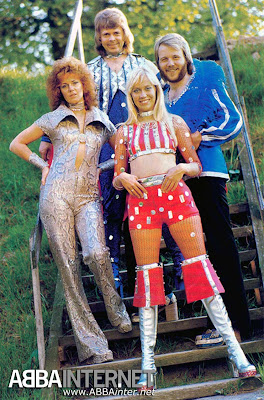 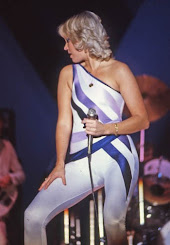