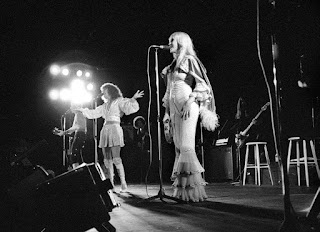 One of the things that I like to do as I'm making progress on the illustrations for The Story of ABBA 2.0 is to listen to ABBA songs that are from the year that I'm currently drawing.  I just started colorizing illustrations for the year 1975 and I found that listening to the tracks from the ABBA album just wasn't getting to me when drawing pictures of ABBA performing on stage during their 74/75 tour.  A lot of bootleg recordings from ABBA's concert in Eskilstuna have appeared on YouTube every so often over the past several years, and those recordings are absolutely fantastic!  Hearing these recordings really makes me want another live album.  I would really love to hear songs like "King Kong Song" (one of my favorites actually - sorry Bjorn and Benny!) and "Gonna Sing You My Love Song" live and released officially.  That would be nice. :)
Posted by ABBAFan456

Email ThisBlogThis!Share to TwitterShare to FacebookShare to Pinterest
Labels: Random, The Story of ABBA