As a growing artist, one of the things I like to do is look back on some of my old drawings (despite a lot of them being quite cringe worthy...) and see how much I've come along and improved.  When doing just that just a moment ago, I noticed I drew this particular drawing of Frida I believe in 2013.  For some reason, I've always felt that I shouldn't redraw photos that I've already drawn - drawing pictures from the same photo shoot, that's fine, but I never like redrawing photos, so I was surprised that I ended up drawing the same photo of Frida for her birthday last month.  I decided to take this opportunity, however, to compare both drawings that were done 5 years apart.  And I must say, I am impressed.  Even though I did the second one digitally, so I have a lot more control on color variety and stuffs so you can't really compare it to a drawing that is (badly) colored in with CraZart color pencils, but I think it definitely shows how I've learned to blend and actually take my time in trying to get a drawing to look good. 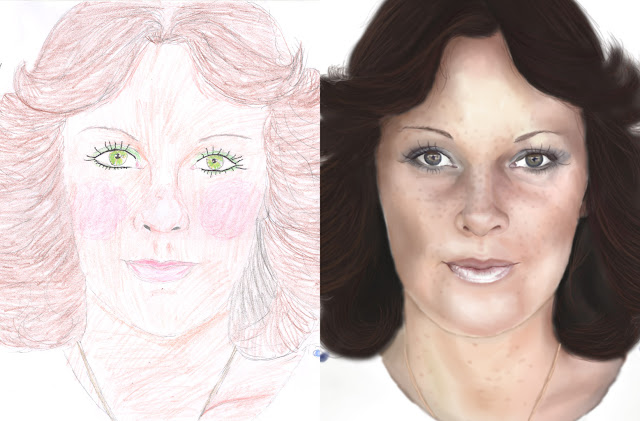 Back in 2013, I would simply draw lines in random directions in order to try and block in the color to the best of my ability.  That was a bad idea in my opinion because, while in real life it doesn't look terrible, when you scan it in, you can really see everything that is wrong with that method.  When doing digital drawings, blocking in the colors is so much easier, but drawing in the direction of the contours of the face is still useful.  With physical drawings there's also no layering - while yes, you can layer more and more color on top of the paper, you don't have the option of going back and changing the under layers.  Basically what I'm trying to say is, I don't really blame myself for doing so badly on the 2013 drawing, haha, because it's not as easy as digital drawing, but also I could have done better.  :P  Nevertheless, it's super cool seeing how much I've learned and improved over these past 5 years. Like, I know now that it's better to not use solid black on the eyelashes, and that instead you use a more natural dark brown or blue to keep it more realistic. :)