I believe I've blogged about this before, but I'm going to do it again because I can. ;) After their "break-up" in 1982, ABBA never reunited.  (They did technically in 1986 with the Tivedshambo video, but whatever.)  They never sang together publicly (there were a few private performances here and there, I believe).  And whenever they're asked if they're ever going to reunite, they always say no.

In 2008, ABBA "reunited", but the four of them never stood close to each other as can be seen in the image up there. ^

The closest we got to a "reunion" was at the ABBA the Museum opening with Frida, Benny, and Bjorn.  Agnetha visited a while later. 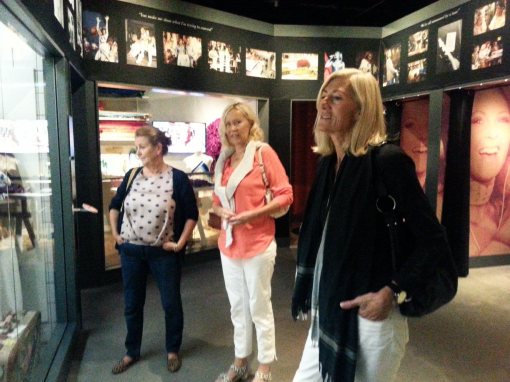 To ABBA, a reunion means all four ABBA members have to get back together and perform a song on stage while wearing the old stage costumes. That's why they all say to no to a reunion. But to me, a reunion is for all four ABBA members to appear at a public event, stand next to each other, and just be there.  They don't have to sing and they don't have to wear their old costumes.  All four of them just have to be there together.  And if they wanted to sing, they could.

Next year, the Eurovision Song Contest will be held in Sweden again, and I'm thinking that maybe, just maybe, the ABBA members could reunite the Becky way.  :)
Posted by ABBAFan456