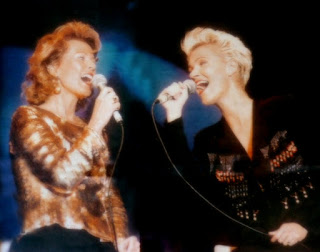 Today, Swedish singer and member of the duo Roxette, Marie Fredrikkson passed away at 61.  I will admit, while I know of a few of Roxette's songs, I've never actually listened to any of their songs myself, but from what I've heard, I know that Marie Fredrikkson was an amazing singer with so much talent, she will be greatly missed by everyone.

On Frida's 1996 album Djupa Andetag, Marie sings a duet with Frida called "Alla Mina Basta Ar". Prior to that, the two of them collaborated on other projects, such as the Artister för Miljö gala in 1992.

I feel like I should actually go and listen to some of Marie Fredrikkson and Roxette's work, so I hope to spend today doing that.