My thoughts on Eurovision

I wanted to wait until I could watch the winner's full Eurovision performance before I posted about this, but for some reason nobody's put up any good clips on YouTube, so I'm just going to post this anyway. :3 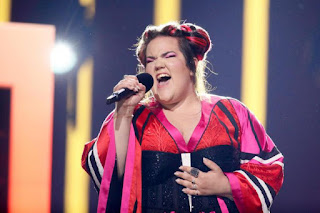 This year, Netta Barzilai won the Eurovision Song Contest with her song "Toy".  Congratulations Netta!!  I'm not that big a fan of her song, but hey, she was voted the winner, so I'm happy for her. :)  Just like with the winner of 2016, Jamala, I can't say I liked her song very much either, but she won for a reason and I'm happy for her.

I feel like I'd like Netta's song more if it wasn't so crazy sounding.  But that also makes her song very unique and different, kinda like how ABBA won the ESC of 1974 because "Waterloo" was different than any other song entered in the contest before that.  Also I'm sure the meaning to her song is a good one, I just don't completely get it.  Like I said before, I haven't actually watched her performance, but I'm sure she put on a great stage show which, along with the uniqueness of the song, helped her win.  I also happen to think she has a good voice. She sounds great in the studio recording. :)

I've seen lots of conflicting opinions about Netta winning the contest.  Some people aren't very happy because of Netta's country, others think her song wasn't very good and don't think she should've won, and then there are those who like it.  I don't think people should be holding Netta's country against her because, correct me if I'm wrong (I haven't actually watched any of the Eurovision Song Contests in full, except for the one from 1974 because of ABBA, haha), but isn't the Eurovision Song Contest just about picking the best song based on musical talent and good performance, and not based on the performer's country? 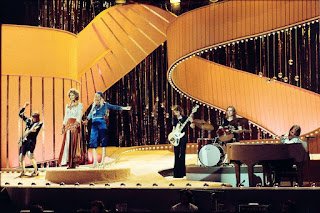 I've also seen some people talking about how they don't see how the Eurovision Song Contest is so important.  For those who aren't into it, I can understand why they don't see the importance of it, but Eurovision is a pretty big, worldwide contest that allows artists from all around the world to compete against each other and the winner becomes immensely successful.  ABBA became really popular because they won the Eurovision Song Contest.  If not for Eurovision, a lot of artists like Alexander Rybak, Måns Zelmerlöw, and many more, wouldn't be as well known as they are today.  I probably would never have heard of them if not for the Eurovision Song Contest, though I possibly might have come across Måns Zelmerlöw at some point because he's from Sweden, as with Loreen, the Herreys, and Carola.  :)

Basically what I'm trying to say is, the Eurovision Song Contest is pretty big and important, but if you're not into it, that's okay, but don't put it down because of that. :)

So this was a very random post, but I wanted to post my thoughts about Eurovision, and I have, so yay.
Posted by ABBAFan456